Our intro to Prague is probably not the first thing that’s remembered by most visitors. Prague, the city, new and old and other bits, straddle the river Vyton, or Vitava. Beautiful blue under clear blue sky

Picked up at train station and delivered to our accommodation we’re greeted before even getting in the door by the owner, Kristina. An effervescent lady and so full of information, she should really be Prague’s tourism ambassador. Coffee in hand she quickly settles into redrawing the city map with helpful notations and small pictures. Brilliant assistance that proved to be. The Aparthotel in Prague is a 20 minute walk from centre, if that’s not a problem it’s my 5 star recommendation. A “boutique hotel” with a wonderfully friendly, fun and super-helpful owner. excellent continental breakfasts are reasonable price to boot. Kristina’s more of a host than a hotel operator. Following our induction to Prague, dropping our bags we head off on the first recommended walk, into the Old Town and Charles Bridge. I’d read the best time to “see” the Charles Bridge was about 6 in morning. We learn why. It’s chokka full of those pesky tourists who are always in my way when I’m shooting, peddlers selling their pictures, jewelry, and other sundry items. Shoulder to shoulder we march back and forth before heading into the town. Popularity of the oldest bridge across the river, The Charles Bridge, is soon proven correct. I return at 6.00 next morning before most touring revelers are up. The bridge history dates back to 1300’s, known for its towers at both ends and the statues at each support, these reputedly added over years by posterity chasing Praguers

I get up early next morning and head back. Certainly not too many people there, but clearly others had read the same info I had. A few hundred people now scattered waiting for the perfect shot of sunrise over the monumental east end tower. Of course a maintenance crew had to drive the Goddam big truck, park right in the middle and proceed to carry out some repair or other. Nice for those who’d got up early and made effort to get there ahead of the crowds, including the 3 wedding groups there for the photos of their lifetime. A couple of Old Town restaurants. The bottom one in a back street served us well.

As with all tourist hot spots restaurants are everywhere. Of course we are in a foreign land and so the things usual to us don’t always apply. Like in may parts of Europe when you order a meal they deliver a basket of bread, sure its often dry, like it’s about 3 days old. I guess its not really, but certainly it different for us. Here’s a beaut in getting caught out though;
We pick a restaurant at one end on Wenceslas Square. Not one of the ones above. Now I know you’ll likely say serves you right for restauranting in the mid of the tourist centre as opposed to heading out a little. After being dragged in by the staff at the menu board, we sit down, eventually someone arrives to take our order. Anne has been repeating herself all day about wanting to try traditional Czech food. Firstly, parched after a day long wander in 25+degrees we seek a gin and soda. 3 minutes of discussion in broken English/Czech (which we are totally inadequate at) we learn the flat soda is extra. Oh well, need it. Then the food order is being placed. A chicken dish is ordered, at which the waitress turns the menu page points to and says you need bread too, NO not needed says Anne. You must its compulsory and it’s 100 koruna. This EU member doesn’t use the Euro as standard currency. Then shrugging and giving up on that , we’re told the stands of pretzel sticks on the table are for us, complimentary, well that’s what we believed was said. Not being fans of these anyway, we take one each, nibble the end and deposit the balance on a plate. Then “compulsory bread” arrives, its one little bun with a wedge of butter. Be thankful for small mercies my mother used to say, in this case the small mercy was the butter, not that the bun was big, it wasn’t. and it had an exterior as hard as an Amsterdam madam. Would have been easier to eat concrete! The fun of travel. For the rest of it meal was ok though. Then came the bill. Gin, water, bread, meals,and bloody pretzels all accounted for. No discount for fact the pretzels were still largely intact! What would travel be without these stories? Then came the stand-over tactics. On bottom of bill comment tips are optional and 3 sets of tip calculations for our convenience. Actually, when we arrived we’re told can pay with card for food and drink, tips must be cash. This was repeated at least 3 times during our meal. I pay on card and the waitress stands there saying tips must be in cash, again and again. I nod sagely, I understand, so? She ain’t going anywhere. Tips are optional the message says. Seems to us she’s saying “like hell”. So I fish into my pocket and pull out coins that must amount to about 50% of the minimum helpful calculation and put them down. She glares disapprovingly at my coins. I say no other cash. She “gracefully” grabs them and says thank you very much as she rushes off to the next set of suckers.

A “fun” experience, but I must say way from typical here. Generally, very courteous and friendly and they try hard.

We’ve had two beautiful, though hot, cloudless days in a row, we’ve seen a lot of fantastic historic buildings, walked a million miles and got lost in the old city late at night, twice and Anne is still on about a traditional Czech meal, not sure of the connection, but thought I’d mention it anyway. We head out to Vysehrad a top of a hill significant Gothic church, magnificent little graveyard full of Czech notables (dead of course), and a chance to catch a sunset. Another excellent suggestion by Kristina. After a climb, a wander through the graves and a wait for a sunset that didn’t eventuate (that’s nature for you). We head down to a restaurant we passed on way up stating it provided traditional food. The menu looked interesting, but turns out without a booking no chance at 8.00 pm of getting in. Bugger. Walk on, come across another where judging from what we can hear all the diners are local. Seems worth a try. On the menu are these things we’ve seen on menus everywhere – dumplings. I decide it’s time, dumplings with roast pork. Well they duly arrive, interesting but you’d have to be hungrier than me. Anyway the meal was pretty good and reasonable.

We are at Prague Castle for changing of the guard. Our wanders expose us to streets and streets of wonderful old European architecture. 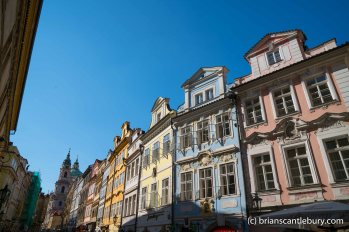 With a little impressionist input, an almost fairy-world look to the Old Town Square cathedral. So much to see here. Today wandered past a church with crypt under. In we went. Turns out it was the church crypt that Czech soldiers hid in after their assassination of a SS commander and where the Nazi’s hunted them down and shot them. Incredible history. Places for coffins where the Czech soldiers attempted to hide from Nazis, the Church of Saints Cyril and Methodius crypt. And at the other end of the square to our now fabled dining experience; Silhouetted the Good King Wenceslas on his charger with flag aloft. He must have been good as not long after he was assassinated.

An interesting public art piece in entrance to the Dancing Building. Like much of the continent, use of public toilets incurs a fee. By the time you find one the need has often become urgent, if not critical. There’s usually someone standing in your way right when you least appreciate it, asking for 50 krona. As you fumble for your money/wallet and wait for the change the fear that your pants may be employed for something you’d rather they weren’t. No photos of this though!

The more one wanders, the more one sees. And we have seen so much more, but this is hopefully a small expose to our experiences in Prague 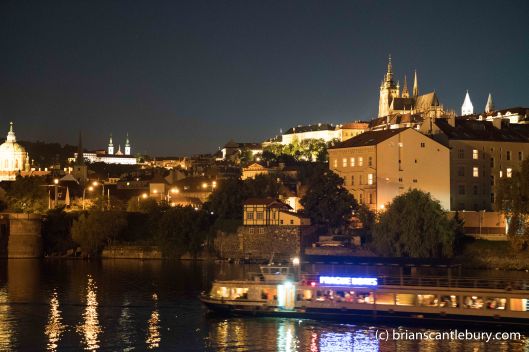 Prague Castle and other architectural gems across river